Cameron says SNP should apologise for state of ferries 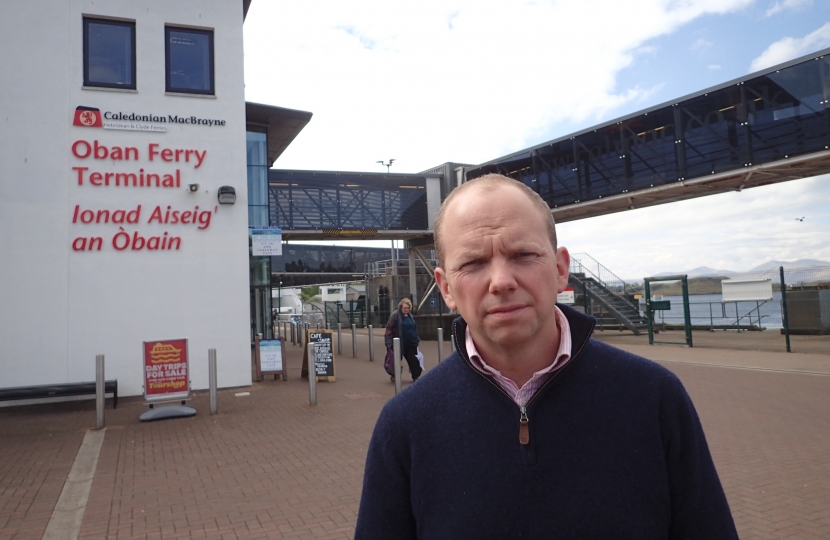 Highlands and Islands MSP Donald Cameron has said that the SNP should apologise after it was revealed that at one point 25 out of 28 CalMac ferry services were facing disruption earlier this week.

Mr Cameron said: “SNP ministers should apologise to communities across the Highlands and Islands for their failure to provide a resilient ferry service.  They have been in power for more than 12 years and the buck rests with them."

“Senior SNP politicians, like Ian Blackford, Angus Macneil and Brendan O’Hara who represent many of the communities most affected, have never stopped banging the drum over independence and have failed to keep their eye on the ball when it comes to ferries."

“I suspect that the fact that the MV Loch Seaforth broke down just a day after it re-entered service on the Stornoway to Ullapool route will have been the last straw for many residents in the Western Isles.”

Mr Cameron, who spoke during a Scottish Conservative sponsored debate in the Scottish Parliament on the ‘Resilience of Scotland's Ferry Network’ last week added: “It was clear from the responses from the SNP benches that they have been caught on the hop.  They have few answers and mostly resorted to hand-wringing and attempts to fob the blame on to someone else."

“That will no longer do for hard-pressed people who rely on the ferry service to go about their day-to-day business. They deserve better than this.”

Another day, another example of SNP incompetence and failure.  It is no coincidence that everything the SNP has control over in government is in chaos, whether Finance, Health, Education, Ferries or Rural Payments.

Scotland simply cannot afford to have the failing SNP in charge.  In a week that has also seen unemployment rising in Scotland whilst it continues to fall in the rest of the UK, and SNP ministers accused of manipulating figures to deny rising youth unemployment, Donald Cameron has exposed yet another blow to the Scottish people and economy in areas dependent upon the ferries.

On December 12th you can vote Scottish Conservative and send a clear message to the separation-obsessed SNP: we have had enough of your failure.

Today we have announced a world-leading £1.57 billion package of emergency grants and loans to protect Britain’s world-class cultural, arts and heritage institutions from the impact of coronavirus.