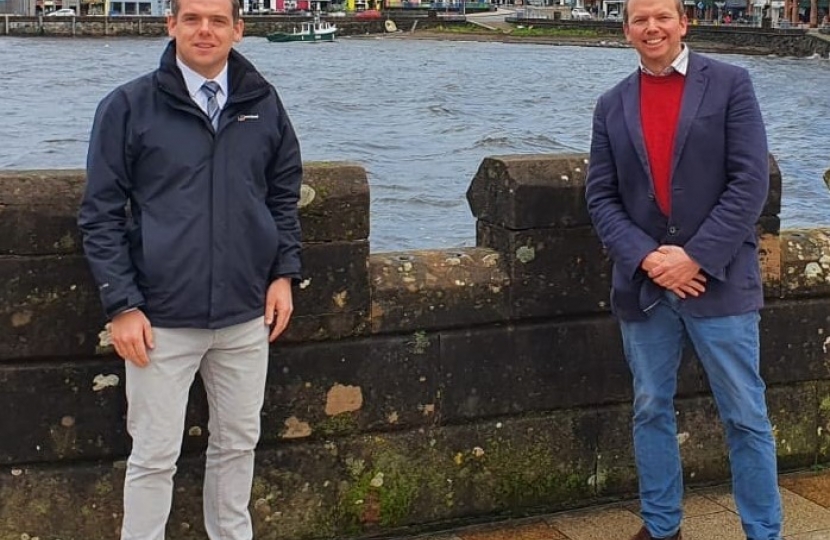 Highlands and Islands MSP Donald Cameron has backed Scottish Conservative leader, Douglas Ross, for making jobs and livelihoods the number one priority for his party, after dealing with the Covid-19 pandemic.

Mr Cameron, who accompanied Mr Ross earlier this week on a visit to Argyll and Bute, made his remarks as concerns mount that the region is likely suffer a greater economic loss from the pandemic than anywhere else in Scotland.

“Douglas is absolutely right to prioritise getting people back into work, and saving the livelihoods of thousands of people across the region."

“Highlands and Islands Enterprise which, in the past, has led the way in supporting job creation here, has just stated that it lacks the capacity to respond adequately to the jobs crisis facing us."

“In the meantime I have seen very little evidence that decision-makers in Holyrood, focused on the Central Belt, understand how vulnerable we are.”

Mr Cameron, who is the Scottish Conservative Shadow Health Secretary, added: “Protecting jobs is not just about people’s income. It is also about their health and welfare. And that’s why there must be no distractions to our efforts to stage an economic recovery which gives people hope and keeps them in work.”

The chief executive of Highlands and Islands Enterprise has been reported as saying that the agency lacks the financial resources to mount a “comprehensive response” to the Covid-19 crisis. A report commissioned by HIE has confirmed that the region was faring worse than others because it has a greater share of employment in sectors most affected by the pandemic, with tourism, creative industries and construction hardest hit.