He was elected Leader of the Scottish Conservative Party in August 2020.

Douglas was born in Moray and was educated at Forres Academy and the Scottish Agricultural College. Prior to entering politics Douglas pursued a career in farming.

He is a qualified football referee.

Douglas lives with his wife Krystle. They have two sons.

Wearing facemasks should be up to the public

The Scottish Conservatives have said it should be up to the public to decide whether or not to wear a facemask, after the SNP Government again extended the legal requirement for them to be worn in certain public settings.

An under-pressure Nicola Sturgeon was slammed today for “one of the worst public spending disasters since devolution” over her government’s handling of the ferries scandal that has cost taxpayers £250 million already.

Douglas Ross has accused the First Minister of not trusting the public after she chose to indefinitely maintain the legal requirement for facemasks to be worn in shops and on public transport.

Douglas Ross has challenged the First Minister to drop her opposition to domestic oil and gas production to strengthen Scotland’s energy security – and deal a blow to Vladimir Putin.

In a speech today, Scottish Conservative Leader Douglas Ross will say that we must break the “20th Century mindset” that technical skills are somehow less important than going to university.

The First Minister today defended her government's record despite a “damning” Audit Scotland report on the state of Scotland’s NHS.

Scottish Conservative leader Douglas Ross said: “I welcome the First Minister’s decision to move away from blanket legal restrictions towards an approach based on public health guidance.

First Minister blasted for not budging on school face masks

Douglas Ross has challenged the First Minister over her refusal to budge on the requirement for face masks to be worn in schools. 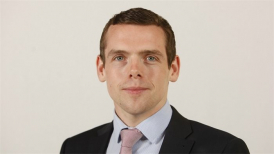